Heparin is the most used injectable anticoagulant worldwide. However, patients treated with heparin can paradoxically develop a rare but frequently suspected and potentially lethal thrombotic complication: Heparin-induced thrombocytopenia (HIT).

What is HIT Confirm®?

Hit Confirm belongs to the emerging class of flow cytometry-based HIT in-vitro test kit. It detects heparin-dependent platelet activation for the purpose of helping in confirming the diagnosis of Heparin-induced thrombocytopenia (HIT),or for research-wise investigation, depending on the local regulatory status.

When to use HIT Confirm®?

Within the HIT investigative workup, HIT Confirm offers rapid on-demand alternative when gaining time critical information on how likely it is that a given patient has HIT requires broadly available and possibly repeatable test with a much shorter long time to result than the one of conventional functional assays, which may range from days to weeks. 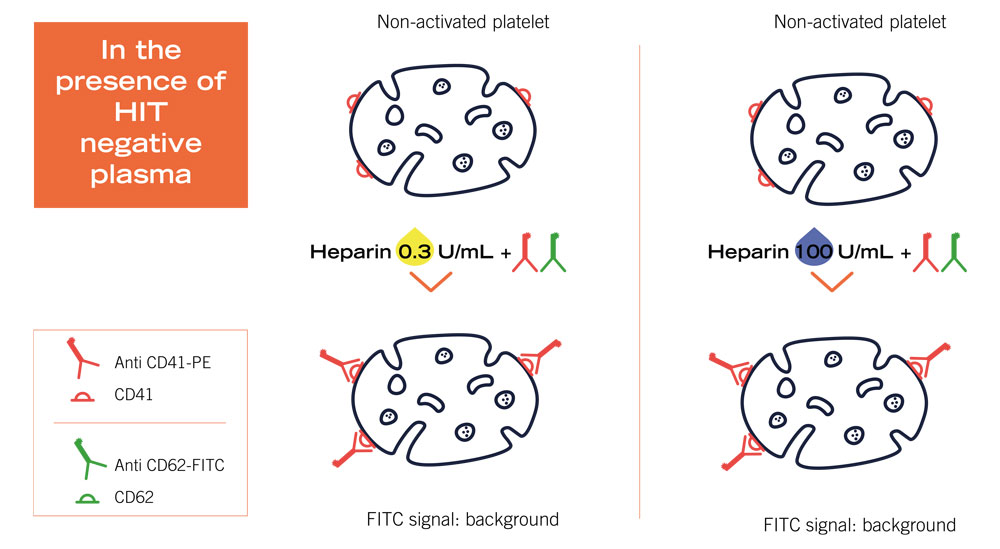 How does HIT Confirm® work?

Functional assays simulate the pathophysiological effects of HIT with antibodies directed against PF4-heparin complexes contained in patient plasma (or serum) triggering platelet activation in the presence of low, therapeutically equivalent concentration of heparin, while no such activation is triggered in the presence of high, supratherapeutic concentration of heparin. 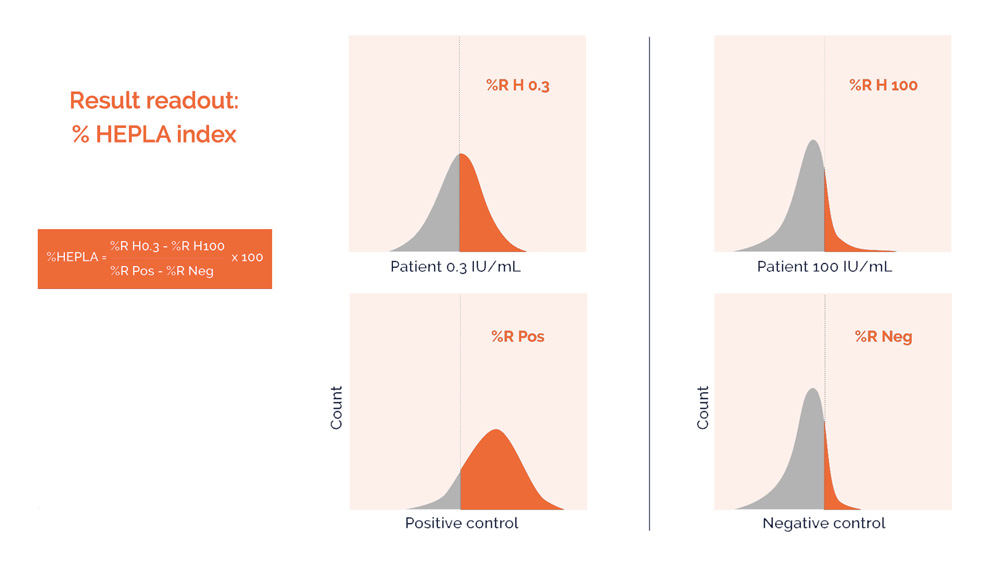 How to perform HIT Confirm®?

Setting: HIT Confirm can be performed routinely in any laboratory operating any type of flow cytometers.

Platelet donors: as any functional assay, HIT Confirm requires preparing PRP from healthy donors. However, contrary to most other functional assays, required volumes are low (in microliters range) and there is no need to wash platelets, which is a demanding preanalytical step and may cause platelet activation.
As for any functional test, quality donor’s platelets and number of different PRPs used for testing is key.

Quality of platelets: refers to their ability to be activated by antibodies directed against PF4-heparin complexes, which is partly dependent on a genetic polymorphism of platelet FcgR2receptor whose binding with antibodies directed against PF4-heparin complexes triggers platelet activation.
In addition, platelet donors must not have taken drugs - including vitamin C - or diets that may possibly depress platelet function.
Because of the potential lack of reactivity for platelets from healthy donors, quality of platelets – i.e., how “good” a platelet donor is for the purpose of testing HIT – must be verified by using a HIT positive control sample or, since recently, by using HIT mimicking recombinant chimeric antibody (5B9).
At least two different PRPs must be used to account for the risk of using poorly reactive donor’s platelets

Tubes per test: each test requires four tubes, with two for testing heparin concentration dependent platelet activation, with 0.3IU/mL (H0.3) and 100IU/mL (H100) respectively, and two for normalization to maximum reactivity of donor’s platelets induced by a potent agonist, with PRP only at basal state (NEG) and TRAP-induced activated platelet (POS).

Data acquisition and analysis: (see IFU for details): the percentage of activated platelets (%R) in the four tubes is computed from the quantification of individual platelet fluorescence and visualized with histograms.

%HEPLA index is used to conclude whether HIT Confirm® assay result is positive, negative or indeterminate, assuming full compliance to preanalytical and analytical requirements, as follows:

The “believe the positive” rule applies, with HIT Confirm testing considered positive if at least one positive result among at least two non-indeterminate nor aberrant assays.

Indeterminacy or aberrant results must lead to repeating the test with a new PRP.

How likely is the diagnosis of HIT for patient tested positive on HIT Confirm®?

Though the primary performance characteristics of a test at populational level are sensitivity and specificity, the clinical usefulness of a test in terms of informing decision making at the individual level of a given patient depends on the test’s positive and negative predictive values.

How accurate is HIT Confirm®?

When performed with two qualified PRPs HIT Confirm was shown to be as accurate as SRA when both assays were compared to expert opinion in a large retrospective adjudicated trial.

How predictive is HIT Confirm®?

Positive and negative predictive values of HIT Confirm performed in a diagnostic workup setting can easily be computed using the didactic mobile application NomoHIT, that is available for both iOS and Android systems.

Predictive value of any test depends upon the likelihood (i.e., probability) that the tested individual patient has (or not) the to be diagnosed condition.

Respective probability of being positive in HIT diagnosed patient 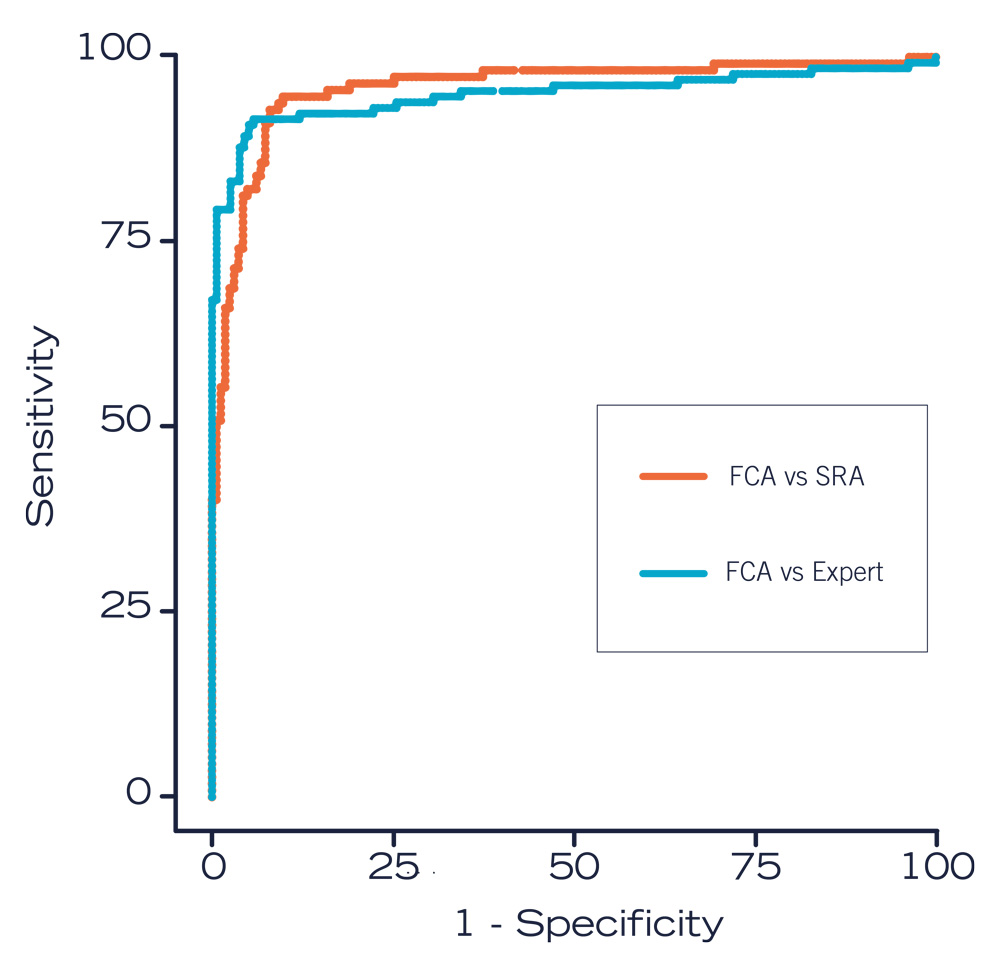 Hence, contrary to HIT Confirm intrinsic test characteristics of sensitivity and specificity, positive and negative predictive values, which are post-test probabilities of being diagnosed or not diagnosed with HIT respectively, depend on the probability of the patient being diagnosed with HIT prior to performing HIT Confirm. This pre-test probability is itself depending on what the post-test results of 4T’s score and immunoassay were precedingly.

Predictive values are computed using Bayesian inference, with the help of graphical tools such as Fagan nomogram and visualized by pre-test post-test curve that figures how predictive values vary with the prevalence of the diagnosis of HIT.

For Laboratories: To enable on-demand, rapid, convenient, and reliable assay, with short time to result and reduced operator’s hands-on time, whose results are not subjective, easy to compute into an HEPLA Index mirroring HIT physiopathology, for a better standardization.

For Clinicians: To timely support the clinical decision as to whether maintain stoppage of Heparin and replace it by an alternative anticoagulant or not; to monitor potential transition of HIT seropositive patients with circulating anti-PF4-Heparin complex toward HIT proper.

Primary aim is in assessing patient thrombotic status as part of a triage process (whose purpose is to prioritize patient management according to the (likely) severity of their condition) in emergency setting. Secondary aim is in monitoring recovery of procoagulant state.

Primary aim is in assessing platelet function through a platelet differential measuring the distribution of selected (functionally heterogeneous) platelet subpopulations.